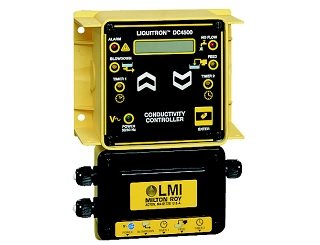 The DC4500 is a microprocessor-based conductivity controller. It is designed for use in a variety of water treatment applications requiring precise control of totally dissolved solids and chemical feed. Among its many uses, the DC4500 will control conductivity and chemical feed in cooling towers and closed loop systems.

LMI’s DC4500 Series of conductivity controllers allows the greatest programming flexibility for cooling tower system applications. This is accomplished through the use of an extensive options menu that is easy to use. BLEED or BLOWDOWN of system water by valve control can be based on several setpoint options:

FEED of chemical (inhibitor) can be based on four (4) different methods and the pump control can be either On/Off or externally-triggered Variable Speed.

• FEED time calculated as a percentage of total BLEED time

• FEED based on flow meter input

on the following options:

ALARM indicators and relay outputs are energized based on the following conditions:

• NO FLOW condition exists (flow switch must be installed)

The display is a 16-character backlit LCD (liquid crystal display) which is visible in all light conditions.

A three-key position membrane is used to enter data and settings (see Figure 1).

The conductivity range is 0 – 20,000 μSiemens. The units can be either μSiemens or PPM/TDS (total disolved

All setpoints and parameter settings are retained permanently in a special nonvolatile computer chip memory,

preventing their loss due to a power outage. This nonvolatile memory chip allows the unit to be programmed

before installation. No battery powered backup is required.

either fahrenheit or centigrade. This reading also provides the basis for temperature compensation which is

performed in all modes.

Get started with a new system today!